The program, which is sponsored by our Section, is free and open to the public. The event is coordinated by the NCJW, West Morris Programming Committee, headed by Debbie Schwartz.

In 1997, Betsy created a “green news beat.” On Earth Day 1997, the eco-journalism pioneer launched TrashTalk: Sound Solutions for a Healthier Planet and People, offering waste reduction tips on KCBS. She also served 10 years on her synagogue’s Green Team and was instrumental in getting solar panels installed, one of the first congregations to do so. 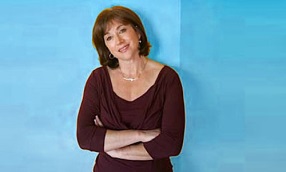 She was the first mainstream commercial broadcaster to recognize the need for mass media outlets to communicate the urgency and complexities of growing ecological challenges and to discuss solutions with experts. From the outset, Betsy’s mission has been to bring green content and consciousness into the daily programming mix, and make environmental challenges and solutions just as important and engaging as other compelling news of the day.

For a new book Climate Abandoned: We’re on the Endangered List, edited by Jill Cody, Betsy wrote a chapter on how the media abandoned its duty to inform the public about important news of the day, even if it wasn’t popular. A copy of Climate Abandoned will be given as door prize as part of the “Climate Chutzpah” event.

“For as long as I’ve been actively covering the environment and climate news, Jews have been in the forefront of activism and advocacy, but in the last few years I’ve been heartened to see so many new groups take on green issues as a primary focus,” she says. “We need all the help we can get in this epic effort to turn the eco-tide and the Jewish people know how to get things done.”

Betsy describes herself as a “Woman on E-mission,” with a goal of  “breaking through the green ceiling in media,” which she says is “twice as thick as the glass ceiling.” She’ll explain the many obstacles on her journey and why it has taken climate chutzpah to prevail in bringing environmental content and consciousness to the mainstream public. She adds, “I view my 20 years of covering the climate and the environment as being my version of tikkun olam [mending the world].”

Throughout her years on the green/climate beat, Betsy noticed how many environmental advocates–and organizations–were Jewish. In the last few years the number of Jewish non-profits focused on addressing the climate crisis has exploded, not surprising given our teachings. Betsy will share a few of her favorites and how you can get involved in tikkun olam for the planet. She will offer tips for things that everyone can do to become part of the solution.