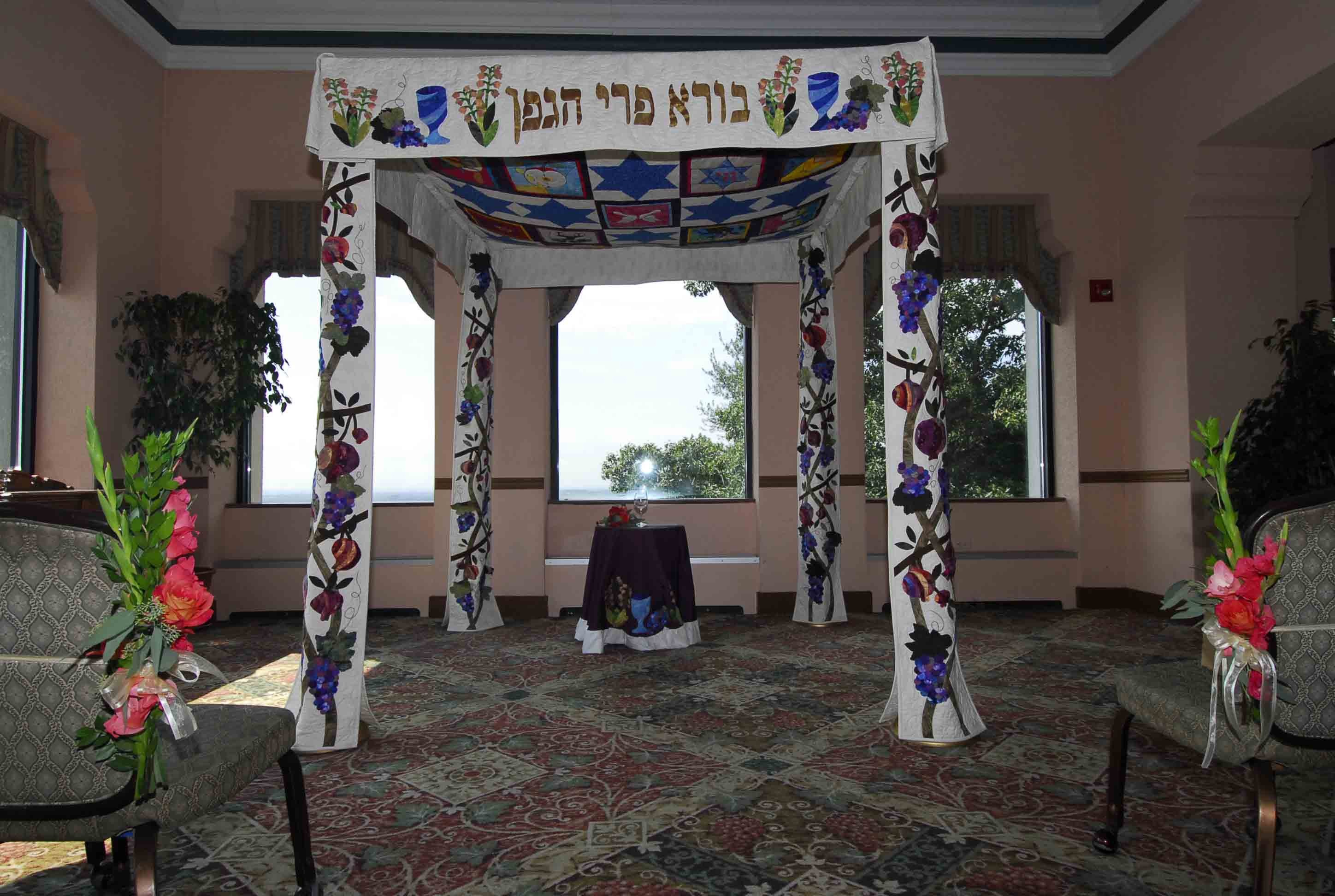 What is the Chuppah?

Central to a Jewish wedding is the chuppah, or wedding canopy. The public ceremony in which the couple enters the chuppah is a proclamation by the couple that they are now bonded together as man and wife. The chuppah symbolizes the home to be built and shared by the newlywed couple and their joy and faith in their future together. The chuppah is such an important part of the Jewish life cycle, that when a Jewish baby is born the blessing “may he/she be introduced to the study of Torah, to the wedding canopy, and to good deeds,” is one of the blessings that welcome the baby into the Jewish community.

On the day of the wedding, the couple signs the ketubah (marriage contract) before two witnesses in the kinyan ceremony. In remembrance of the deception practiced on Jacob, who was tricked into marrying Leah before he could marry Rachel, the groom verifies the identity of the bride in the bedekken ceremony, and then lowers her veil over her face. The rest of the ceremony continues under the chuppah.

The bride and groom are welcomed to the chuppah and they share a cup a wine together as the Betrothal Blessings are recited.

The groom places the ring on the bride’s right index finger, the finger of intellect which is used to point at the words when reading the Torah. The ring is traditionally a plain gold band, representing true value and purity. In modern weddings, the bride often places a similar ring on the groom’s finger. After the rings are exchanged, the ketubah is read aloud.

The Seven Blessings, or sheva berachot are recited, and the couple shares a second cup of wine. After this, the groom crushes a glass, wrapped in a napkin, under his foot to symbolize that there are times of sorrow as well as joy to be expected in the marriage. The final, traditional Priestly Blessing is recited, and the bride and groom go to a separate room for a short period of seclusion before the reception and celebrations begin.

The History and Symbolism of the Chuppah

By entering a chuppah, a woman declares her independence from her family. The modern chuppah began to be used in the sixteenth century in Eastern Europe. At that time, weddings were traditionally held in the community market place, and a canopy was used to separate the ceremony from the rest of the market place. The canopy is made of cloth, supported by four poles, and symbolizes the curtain that covers the ark of the Torah inside a synagogue. The chuppah can be embellished as a beautiful piece of ceremonial art but some chuppot are simply a tallit (prayer shawl) supported by four poles, representing the groom wrapping his bride in his tallit.

The four poles, which represent the pillars of trust and faith on which the marriage is based are often held by members of the wedding party. Rabbi Yosi ben Yohanan said, “Let your house be wide open,” so there are no sides to the chuppah, making it like to the tent of Abraham, which had entrances on all four sides to welcome travelers. Thus the chuppah symbolizes a Jewish home filled with acts of love, including hospitality to strangers.

Traditionally, Jewish weddings take place outdoors, under the chuppah, and under the stars. symbolizing the hope that the couple will have a large family, and recalling G-d’s blessing to Abraham, “I will greatly bless you, and I will exceedingly multiply your children as the stars in heaven.”

Symbolism in the NCJW Chuppah: The Seven Blessings

Key phrases of each of the Seven Blessings wrap around the chuppah on the valences, to surround the wedding couple with the Blessings. The number seven represents the days of Creation and symbolize the creation by the bride and groom of their own “new world” together. The blessings are:

Blessed are You, Lord our G-d, Ruler of the Universe, who created everything for Your glory.

Blessed are You, Lord our G-d, Ruler of the Universe, the creator of humanity.

May the barren one exult and be glad as her children are joyfully gathered to her. Blessed are You, Lord, who gladdens Zion with her children.

Grant great joy to these loving companions as You once gladdened your creations in the Garden of Eden. Blessed are You, Lord, who gladdens the bridegroom and the bride.

Blessed are You, Lord our G-d, Ruler of the Universe who created the fruit of the vine.

Grapes, Wine and Kiddush Cup: Our chuppah is festooned with grape vines, grapes and kiddush cups full of wine. Wine is a symbol of joy. The making of wine is also symbolic of life. The kiddush cup is full, symbolizing the overflowing of Divine blessing.

Pomegranates: Pomegranates intermingle with grapes on the pole covers. In the Song of Songs, it says, “Let us get up early to the vineyards; let us see if the vine flourish, whether the tender grape appear, and the pomegranates bud forth: there will I give thee my love.” Traditionally, it is thought that every pomegranate has 613 seeds, which parallels the 613 commandments that must be followed as part of Jewish life. Because the fruit has so many seeds, it is also considered a symbol of fertility.

Lilies of the Valley: Every wedding should be festooned with flowers! Lilies of the valley were chosen to embellish the valences because they are mentioned in the Song of Songs.

Symbols of Jewish Life: L’cha Dodi (I am my beloved), Chai, Hebrew word for Miriam and Baby from the Song of Songs- “life”. Judaism as a Moses, in the wedding lovebirds. religion is very focused bulrushes. on life. Hamsa, the Aramaic word for “five.” It is an amulet in the shape of a five-fingered hand. It originated in Essasouiria, a small town on the Atlantic coast of Morocco. The hamsa is a symbol of blessing and protection. Crossing the Red Sea Moses receiving the Torah, tree of life out of Egypt Ten Commandments

Holidays: Shabbat (The Sabbath), welcomed by Rosh Hashanah (The New Year), reciting blessings over candles, challah wishing a sweet New Year with apples and wine. and honey. Yom Kippur (Day of Atonement), the Succot (Holiday of Booths, a harvest blowing of the shofar (ram’s horn) festival.) The branches of the lulov (palm, declares a time of serious contemplation, myrtle and willow) and the etrog (citron) repentance, and praying for atonement. represent four plant species of the world. Every morning for the 7 days of Succot (except on the Sabbath), the Four Species are shaken and pointed in all directions during morning prayers. Chanukah, the eight lights of the menorah Shavuot (Festival of Weeks), commemorate defeating the Assyrians and commemorates receiving the Ten being able to purify and worship in the Commandments at Mount Sinai. Temple in Jerusalem again.

The Team Behind Our Hand Crafted Chuppah

For further information about renting our gorgeous quilted chuppah, write to:

Weddings no more than a 25-mile radius from Morristown