Rabbi Steven Bayar led a thought-provoking, three-part series titled “Current Challenges to the American Jewish Community,” which kicked off NCJW, West Morris Section’s Our Jewish World 2019–2020 Clergy Learning Series. His talks were held on Tuesdays, September 10, at noon; September 17, at 1:15 p.m.; and September 24, at noon, all at the Morris County Library, 30 E. Hanover Ave., in Whippany. 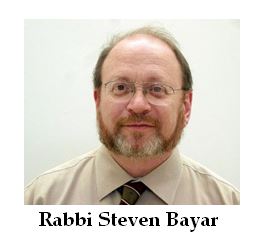 Our Jewish World is coordinated by Melanie Levitan and Ilene Dorf Manahan.

The first session (Sept. 10), called “Ethical Challenges to Our Community: Immigration and Assimilation,” focused on the unique ethical challenges facing the Jewish community as we confront the issues of today. Says Rabbi Bayar, “We will explore an internal challenge (assimilation) and an external challenge (immigration) and discuss how our reactions will influence our future.”

Rabbi Bayar’s second session (Sept. 17), spotlighted “Relations with Israel.” He notes, “The future of the State of Israel is tied to the future of the United States. As allies with common interests, the changing political scene in one country affects the other. We will explore the present and possible futures of this alliance with emphasis on the strained relations between the Jewish communities in both.”

The third session (Sept. 24) examined “How Do We Face the Future—What Can We Do?” The rabbi explains, “In this session we will discuss current trends in our community and where these paths may lead us to before the next election.”

Rabbi Bayar was ordained by the Reconstructionist Rabbinical College and served pulpits in Greenbelt, Maryland and Spring Valley, New York before coming to B’nai Israel Congregation in Millburn in 1989. He is the co-author with Francine Hirschman of Teens & Trust: Building Bridges in Jewish Education (Torah Aura Publications), with Ilene Strauss of Rachel & Mischa (KarBen) and with Naomi Eisenberger, You Shall Teach Them Diligently to Your Children: Transmitting Jewish Values from Generation to Generation. He was the lead author of the ZIV/Giraffe Curriculum (Righteous Person’s Foundation) and as co-founder of Ikkar Publishing has written more than 40 curricula, ranging from the “Philosophy of Moshe Chaim Luzzatto” to “Teaching Jewish Theology through Science Fiction and Fantasy.”

He is a member of the Rabbinical Assembly and Rabbis Without Borders, and has trained as a hospice chaplain, a Wise Aging facilitator and served as a trainer for #GamAni (the Jewish #MeToo Movement) for creating safe workspaces. He is currently the Rabbi Emeritus of Congregation B’nai Israel in Millburn and proudly teaches at the Golda Och Academy in West Orange. He is also the director of JSURGE, and invites you to visit him at jsurge.org.