NBC 4 New York’s weekend anchor David Ushery, the creator of “The Debrief with David Ushery,” gave an inspiring keynote address at the Awards Ceremony for our sixth-grade diversity contest, “What Prejudice Means to Me.”

“The National Council of Jewish Women, West Morris Section, is planting seeds for a better world, starting with a contest like this,” he said. “It’s heartwarming to see the extraordinary artwork and writing of these young people. I’m so proud of you sixth-graders.”BC 4 New York’s weekend anchor David Ushery, the creator of “The Debrief with David Ushery,” gave an inspiring keynote address at the Awards Ceremony for our sixth-grade diversity contest, “What Prejudice Means to Me.”

The guest speaker noted that he would like to say there are fewer barriers today than years ago, but the stories of the young women kidnapped in Nigeria and the Los Angeles Clippers owner’s racist remarks have triggered a discussion about this issue, which is still with us to this day. Ushery told the story of his 98-year-old uncle who served in World War II and became a Pullman car porter: “My uncle took his family from Mississippi to the West Coast because racism was so vicious in the South.”

“Some people make judgments about us before they know us. That’s not right,” Ushery said. Speaking directly to the students, he added, “You demonstrated that you understand that.”

He commended the “wonderful parents and teachers” who “made sure the students participated in this contest,” adding, “We want to reinforce the message that what really matters when faced with stories of prejudice is our reaction to those stories and the actions we take.”

Parents, teachers, school administrators, and the student honorees were also thrilled to meet the speaker. Coordinating the contest is Karen Secular. 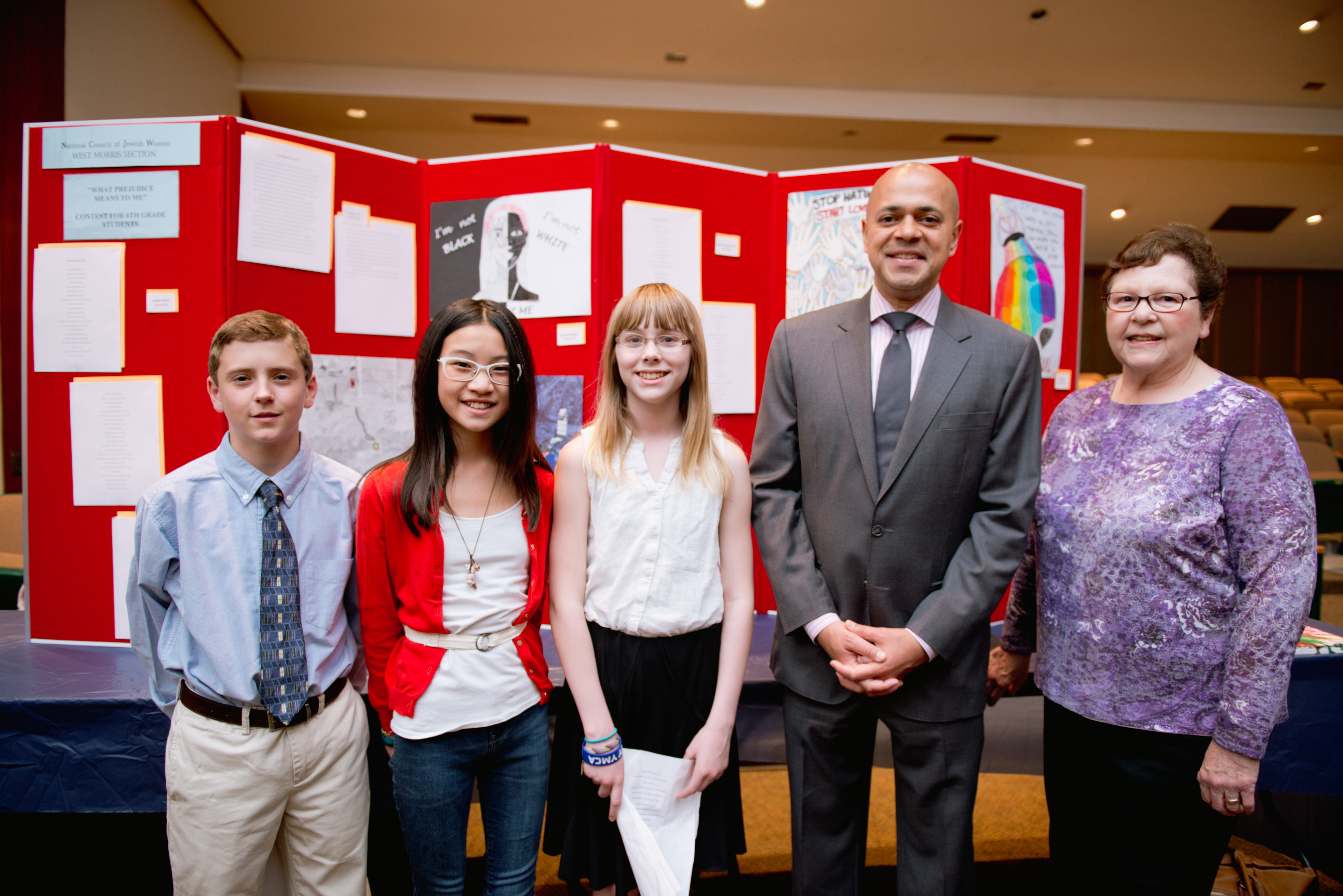 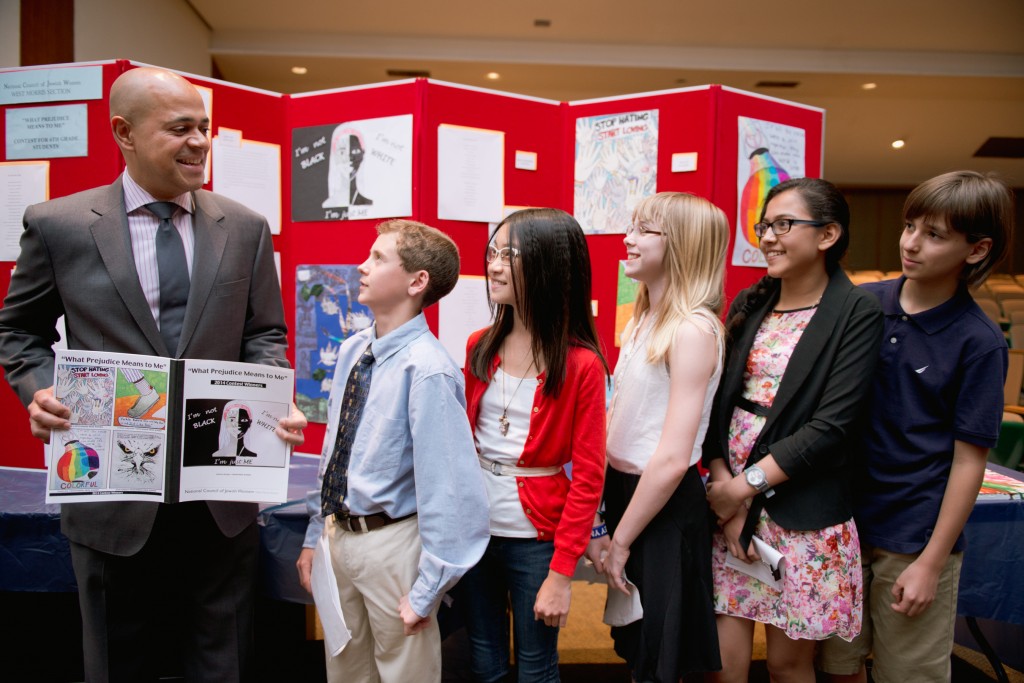 (From left) David Ushery congratulates the grand prize-winners in the NCJW, West Morris Section’s sixth-grade diversity contest “What Prejudice Means to Me,” Rafael Stankiewicz, Haley Liu, and Eileen Helck, all students at Madison Junior School and all grand-prize winners for written work; and Melissa Wright and Steven Aarons, both students at Robert R. Lazar Middle School in Montville and both grand-prize winners for artwork. 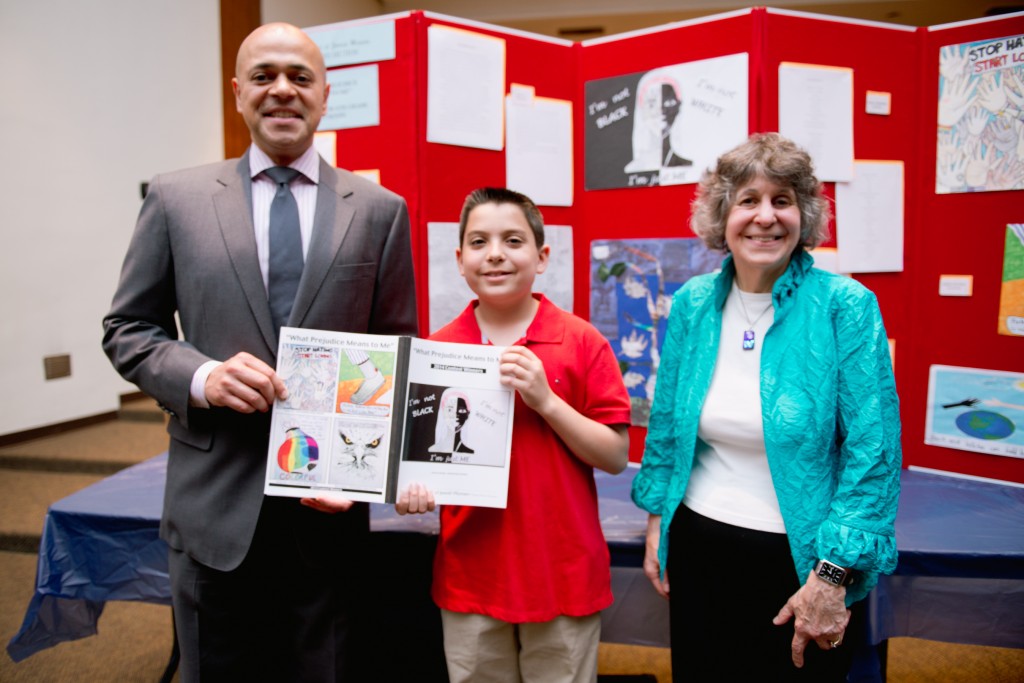