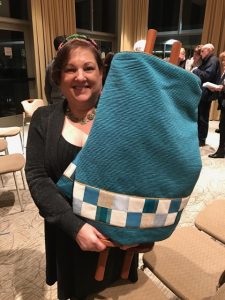 Said Linda, “A fascination with the history of Hebrew lettering and illuminated manuscripts inspired me to learn Hebrew calligraphy. I started writing and illuminating ketubot (Jewish wedding documents) back in the 1970s. I was also a teacher at Golda Och Academy, where I taught Torah, Rabbinics and Jewish history.”

Prompted by her love of teaching, her love of Torah and her love of letters, she found teachers willing to teach a woman to become a soferet (Jewish ritual scribe). With one teacher, she studied the Halacha (Jewish law) of Torah writing. Another taught her the mechanics of lettering, and yet another showed her how to repair Torah scrolls, including how to clean the parchment, patch tears, and sew the pages together.

“One may become expert in the required texts of this vocation, but the key to this art is practice,” the speaker pointed out. “After about three years, and many hours of writing, I felt that I could do this work. I received tremendous support and validation from the people I studied with.”

Linda reached out to a synagogue in Seattle that was commissioning a Torah written exclusively by women. Eventually, she ended up writing approximately one-third of it. Since then, she has written four Sifrei Torah and is currently working on a fifth for the Touro Synagogue in New Orleans.

For each of these commissions, she follows a series of steps, including submitting a sample of her writing, discussing the desired size and weight of the Torah, determining when the congregation needs the scroll finished, and how many times she needs to meet with congregants during the process. She also offers the synagogue help with fund-raising efforts to cover the cost of the new Torah.

Once she receives the commission, Linda orders the materials, including parchment (generally made of cowskin), thread, gall ink, and quills (usually from turkey feathers). She cuts the quills herself.

“Everything used to work on a Torah is natural—the quill from a bird, the thread from the sinew of an animal, and the parchment itself,” Linda observed. “The needle I use to sew the pages together is silver-plated because only precious metals may be used, but not base metals. The Torah is a symbol of peace, so the materials and the implements used to create it can’t be used to make weapons of war.”

In writing the Torah itself, the shape and form of the letters follow traditional and documented styles, as does the format of the columns. Each letter must stand by itself; one letter must not touch its neighbor. In addition, while mistakes may be corrected, the scribe cannot correct a mistake in God’s name. Linda added, “One must adhere to the details of letter writing, but I try to raise my focus above such minutiae by keeping in mind the Talmudic idea that Torah was given to Moshe in ‘black fire written on white fire.’ This notion emphasizes the eternal nature of Torah and its teachings and the spiritual state of mind one needs to try to maintain in copying the holy words.”

Those in attendance at Linda’s fascinating talk had a chance to see several pages of Torah up close.

To learn more about Linda, or to commission her to write a ketubah, t’fillin, or a mezuzah, email her at soferet.coppleson@gmail.com or visit her website at www.ketubahsoferet.com.